Today is Imbolc, and it was a terrible day to gather firewood! The past two days have brought us snow, followed by ice, followed by freezing rain, which was topped off by a flash freeze this afternoon where the temperature dropped something like 10-15 degrees in the course of about an hour. According to Celtic tradition, this means an early spring is coming, since the Cailleach won’t want to go out and replenish her store of firewood.

Whatever else she may have been up to this winter, the Cailleach has been looking out for our little farmstead! Our Solstice litter of rabbit kits is now 6 weeks old. They’re weaned and separated by sex, and enjoying the extra space as they work on growing big enough for harvest. We ended up with a textbook split of 4 does and 5 bucks. Mama is on her own again and just as aggressive as ever, if not more so. Once she is back in condition from her maternal exertions, we’re planning to put her in the freezer. She gave us a fantastic first litter and I am grateful, but an aggressive doe has no place in my long term plans.

We’re planning to breed both of our Californian does on Wednesday. This should allow their litters to grow to butchering size before we get to the hot summer weather, which is very taxing for rabbits. We may fit in one more litter before summer, or this may be all we’ll do until early fall. Regardless, we’re already making plans to possibly expand the rabbitry for next year!

Other highlights I’ve missed blogging about in the past month include finally getting a chance to go through some of the fruit we froze in the summer and making it into jam, breaking in my new pressure canner with a batch of chicken stock, and the return of indoor archery season at the sportsmen’s club…but more on those another time!

Today the rabbit kits are two weeks old. All nine are still alive and growing well! Their eyes are open and their fur has come in. They are half New Zealand White and half Californian, and you can see a little smudge on most of their noses and tails.

They are starting to venture out of the nest box and investigate mama’s food already! Mama is still not very cooperative when it comes to letting us get at them, but thankfully she did not decide to eat them. I hope as they become more mobile and start leaving the shelter of the nest box, that she can also manage to avoid trampling them. She looks so huge next to them!

The book says that while they can be weaned as young as 4 weeks old, it’s better to wait until about 5-6 weeks before we separate them from the mother. So they’ve got another 3-4 weeks before we make any significant changes for them. Then it will just be a question of giving them enough space to grow out to butcher weight. I am still trying to figure out the optimal time to harvest them, since I’m hoping to get use out of the pelts as well as meat. A roaster rather than fryer-size rabbit is perfectly fine for us, so having them get too big isn’t an issue, and I’m willing to take a slightly decreased return on feed conversion to get a better pelt. Some sources mention a “baby prime” coat around 10-12 weeks of age, or a “junior prime” somewhere between 4-5 months (16-20 weeks). My tentative plan right now is to look at possibly harvesting them in two batches, probably around 10-12 weeks and around 16 weeks, and seeing what my results are. But of course this will depend on how everything goes between now and then, and what our schedule looks like! No matter what I will get some practice pelts that I will be able to use as I figure out the tanning process, so they won’t be wasted either way. I have some small projects planned for any useable practice pelts, and some very grand plans once we are getting good pelts on a regular basis!

We are already making plans for our next breeding, which is very exciting. Up until now the only meat we’ve bred ourselves has been the poultry, by hatching in the spring and harvesting in the fall. Having a resource for ongoing production is a very interesting change! We’ll be breeding both of our Californian does in early February, then give everyone a break for the summer months when it’s hot. In late August or early September, depending on how the weather behaves, we’ll start up again. I’m also hoping that with such a rapidly-produced resource at hand, we’ll be able to start bartering rabbit meat for things!

I must say, this New Zealand doe has her faults, but she is nothing if not prompt. We placed the nest box on Wednesday, Day 28 from her breeding. By Friday there was evidence that she had been inside and explored it. Yesterday afternoon she built a beautiful nest and this morning, under a truly astonishing amount of soft, fluffy fur, we found our very first litter of kits. There were 9 live kits, and only one dead one. In retrospect, we think she may have had them sometime between 2:30 and 5:30 yesterday afternoon, but we were worried about checking the nest too early and interrupting her, so we let it go until this morning.

Since this is my first litter, I don’t have much to compare with, but they seemed to have nice round bellies and lots of energy for how helpless and fragile they seem. Surprisingly, it wasn’t too difficult to pull out the nest box and take a look inside, as Mama was busy trying to draw us off to the other side of the cage rather than attacking us (which is her usual M.O., and why I don’t plan to keep her). We removed the dead kit and the bedding from the front of the box that was soiled with blood, added plenty of fresh hay, and put the kits back where we found them under their blanket of fur. Then we cleared out pretty quick after making sure Mama had plenty of food, hay, and fresh water. As the book suggests, we’re supplementing her with plenty of black oil sunflower seeds in addition to unlimited pellets and hay.

We will give everyone plenty of time to settle back down, and do another check later this evening. I only hope the stress of this necessary check wasn’t enough to push Mama into eating the kits. At this point that is my biggest worry, since she is such a spastic personality to begin with. Time will tell. In the meantime, it seems fitting to welcome the return of the light this Solstice with new life on the farm.

Today is the day we place the nest box in the New Zealand’s cage! We will give her plenty of soft hay and a cozy spot to make a nest. If she is bred, the litter should arrive this weekend! Keep your fingers crossed!

Today was my day off from my regular job, and I used it to relax and get some things done! First I started a fire when I got up. We have a fireplace with an insert, and while we don’t heat exclusively with wood, we do try to at least offset our oil usage somewhat. Then, after the house pets were fed, I went out to the barn to feed and water the poultry and rabbits.  I have started the NZ doe on free choice pellets, and I picked up some alfalfa/timothy mix hay for her. I’m still not positive that she’s pregnant, but I want to make sure she has plenty of calories and protein available just in case. The resident gentleman gave me a very serious face over breakfast: 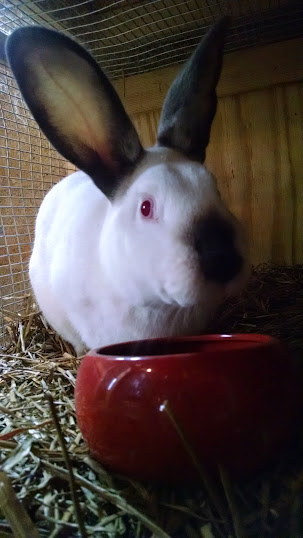 I also spent the morning stripping all the rabbit cages and giving them a thorough cleaning. I’m sure they were a bit confused as I was listening to (and singing along with!) some Christmas carols the whole time! After the barn chores were done, I made a run to the feed store for a few things, and took care of some other errands. Instead of getting clearer and warmer, the weather stayed dreary, so I did some various boring (but necessary) household chores inside. After it got dark and I closed up the chicken door and did a final check of everyone’s food and water, I made myself some dinner, then snuggled up with a blanket, my knitting, and a Christmas movie (Arthur Christmas, which I had never seen but recorded on a whim. It was a fun little film, with an absolutely all-star cast). My current project is a long-overdue baby blanket. It’s in the “black hole” phase, where I knit and knit but it just doesn’t get any bigger! That’s about all I’ve really had going on today. I’m just quietly holding down the fort this weekend while Avery is away, but it’s really nice to get a day to just sit back and take care of myself and the farm for a change.

The days are getting shorter and colder, and we’re in a bit of a holding pattern here on the farm. The harvest is in, and we’re getting used to most meals including at least some element that we grew ourselves, which is an absolutely fantastic feeling. The birds all seem perfectly content, and the rabbits as well. They adapted seamlessly to their new heated water bottles, which work a little differently from their oversized summer ones. The main order of business right now is getting ready for the holidays and making sure our plans are all well-laid for springtime.

No news yet on whether our rabbit breeding was successful; palpating a rabbit is a delicate skill that requires practice, and I don’t think a novice farmer attempting her first palpation on a cranky doe is a recipe for success. Some books will recommend a “test breeding” to determine whether the doe is pregnant, but I’ve decided against that for several reasons. In a test breeding, you would put the female back in the cage with the male, the reasoning being that if she is pregnant she will refuse to mate with him. The problem is, it’s not foolproof. She could accept his advances even if she is pregnant. In rabbits, it is actually then possible for her to become pregnant with two litters at the same time, with different dates of conception. In this event, it’s unlikely for either litter to survive, and it can be dangerous for the doe. So with palpation and test breeding both off the table, we are electing to simply wait and see if she kindles on schedule, with presumptive prenatal care in the meantime.

The rabbit breeding went without a hitch today, much to my surprise considering how flighty this doe can be. It took the buck a few minutes to figure out what he was supposed to be doing, but he got the idea in the end, and it was pretty much by the book after that. I mated them twice, once in the morning and again several hours later. Rabbits are induced ovulators, meaning the mating will trigger ovulation in the female to occur about 10-12 hours after the initial breeding. Mating the rabbits again later in the day can give a better chance for a successful breeding and possibly also a larger litter, or so I’m told. We shall see! Rabbit gestation is about 31-32 days, so by breeding her today we should expect kits the weekend before Christmas if she takes.